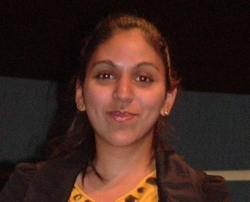 Bakhtawar is a senior at Kennedy High School. Her nominator writes “Bakhtawar is an active, well-prepared learner who is conscientious, organized, and self-directed. She is very optimistic and eager to learn about the world around her. Bakhtawar’s ability and willingness to learn beyond the classroom is what makes her unique and distinguishes her from other students. She was selected among her many peers to Girls’ Nation in Washington D.C., where she personally met President Obama. Through the Bloomington Human Rights Commission and the Bloomington Sister City Organization, she has worked to better her local community.

Her activities over the past few years include volunteering: 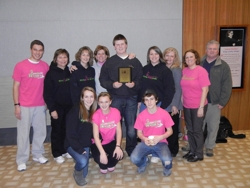 Jennifer Hayes writes in her nomination “Think Pink Kids Foundation was formed in 2007, which eventually led to the formation of clubs at the 4 schools in Bloomington already mentioned. The success of thinkPINKkids has led to a national movement to get more students engaged in the concept of community service for a cause. The result is more than a dozen student-led clubs being formed in several Minnesota schools, and the South Florida Chapter of thinkPINKkids.”

These clubs are funding cancer research projects at the University of Minnesota’s Cancer Research Center, the Scripps Research Institute’s Cancer Center and Bosom Buddies through the $75,000 that they have raised for breast cancer research.

Special recognition goes to Max Woodrich, co-founder of Bloomington’s thinkPINKkids organization (and former Bloomington Loves Its Kids Volunteer Recognition award winner) who recently received the President’s Volunteer Service Award, which recognizes Americans of all ages who have volunteered significant amounts of their time to serve their communities.

Max, along with his friend, Doug Ellingson, was motivated to create thinkPINKkids after first challenging classmates to earn money for a cause by taking on jobs for neighbors and families. The students’ earnings were targeted to helping find a cure for breast cancer.

To bring more attention to the students’ efforts the duo along with the help of Max’s mother, Nancy, created thinkPINKkids. These student groups have organized an annual thinkPINKkids Day and 5K Walk at the Mall of America for the past four years to raise money and create a national movement to get more students engaged in the concept of community service for a cause. 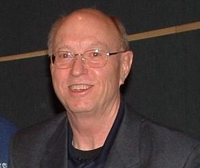 In 1991, Fred Lips was attending church in his home town of Plymouth, MN.  A young man he knew there invited Fred to attend a swim meet to see him compete, and Fred accepted.  While at his very first swim meet, the coordinators of the meet asked the gallery for assistance on deck as timers.  Of course Fred volunteered, and twenty years later he’s still at it.

Fred has been working diligently, giving not only his money (of which he has given much), but - far more importantly - his time and support to the students of Jefferson High School, particularly those young people who participate in boys and girls swimming, the band program (in particular the football marching band), and the show choir program.  While it may be technically true that Fred does not explicitly volunteer in an official capacity for the band or choir, he is a regular and welcome supporter of both programs, so much so that he attends virtually every show for both programs, and even attends the summer practice sessions for the Marching Band - known as 6-10s -  and has travelled to out-of-town shows to support the choir with his presence and admiration.  In addition, he quietly supports both programs financially, and in these respects, he qualifies as a strong volunteer, just in another way.

What makes Fred's story all the more remarkable is that he has no children in our school district, and in fact does not even live in Bloomington.  However, as a result of his tireless dedication to the students of Jefferson - and to their coaches and instructors, as well as their parents - I wholeheartedly support the recognition of this wonderful, humble, gentle and caring individual for recognition as Adult Volunteer of the Year.

Through the efforts of Bev Bliss, Nan Corliss, Marilynn Donoho, Andrea Knoll, Sue Powers, Leslie Stiles and Monica Williams the need for a place for homeless and precariously-housed youth of the south metro area was answered. Through referrals to crisis intervention services, overnight shelter, and onsite support as well as on-site activities by caring volunteers in a safe environment these at risk kids are feeling a sense of place and hope.

Nominator Flora Tsukayama states “the volunteers at Oasis for Youth are life savers for homeless youth. Minnesota is not a hospitable place for the homeless with its long bitter winters. Homeless youth are the most vulnerable individuals who can be preyed upon for human trafficking. Oasis for Youth volunteers help these youth by providing them resources for food, shelter, and safety. They are much deserving of this recognition for being homeless youths’ guardian angels.